There are many stress test frameworks for OpenStack that are all pretty similar in nature. They follow fixed scenarios and fork many worker processes. Often they are difficult to enhance, since they were written for a single purpose.

With blueprint stress-test the community of Tempest developers focused to build a single and very flexible stress test framework, inside of Tempest.

A Stress Test is not a Test Domain

In the past, stress tests had their own area inside Tempest. New tests were introduced mainly as clones of an exiting API, a scenario test or a mixture of both. But do stress tests really have their own testing domain?

The core of the stress test framework is quite simple: It’s responsible for forking worker processes and summarizing results. How many processes should be forked is configurable in a JSON configuration file, which also can provide multiple arguments for each stress test.

In order to stop duplication code, we started to integrate existing Tempest tests into the stress test framework. A wrapper was build to call any kind of unit test and make it available to the framework. With that, it’s easy to group existing tests. Here is an example of how this is done for two unit tests:

This will fork in total 16 processes that will conduct glance and cinder stress testing. 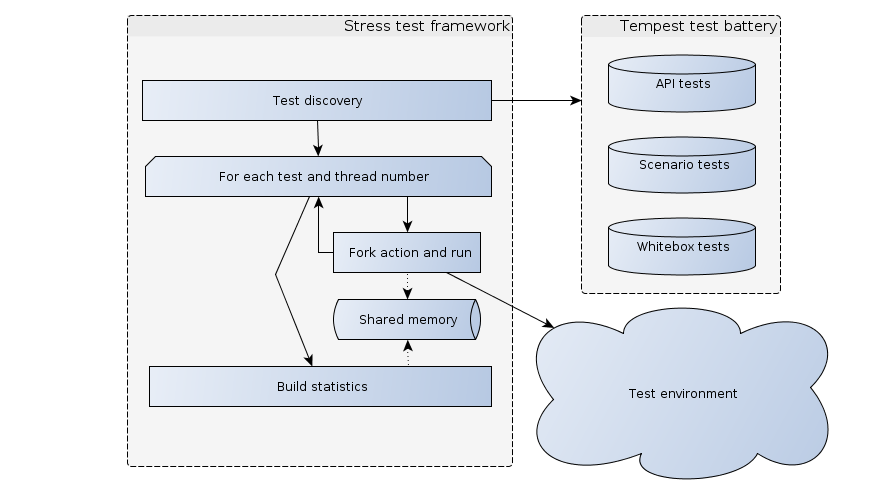 It can simply get added to any existing unit test or used as the only purpose for a test. Internally it is based on the existing mechanism of attribute discovery of testtools and adds the attribute stress. It has one mandatory parameter class_setup_per, since it must be decided when the setUpClass function should be called: For every process, for every action or just globally. This depends on the content of the setUpClass and must be decided by the developer. In many cases a call on a per process level is sufficient.

All existing test attributes like smoke or gate can also be used as filter within the discovery function.

Which Tests are Good Candidates?

All others tests might be interesting candidates to get integrated and used from the test framework. So please feel free to identify new cases and contribute them to OpenStack/Tempest.